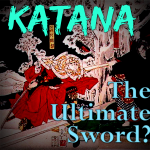 Most people in the west have heard stories of the incredible cutting power and durability of the Katana, a symbol of Japan through two of its feudal periods. Some people can even tell about how their grandfather in World War II had the barrel of his rifle cut in half…